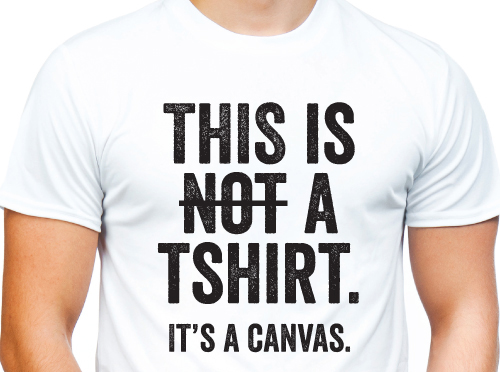 It happened about 6 years ago, heading home, back from a demonstration against the war that went on in Gaza. It wasn’t an uplifting event, to say the least. I left the demonstration feeling defeated, and alone.

On a street corner, someone stared at me. I didn’t know him, but he began to approach me. He was a big guy and walked rather fast, so I became a little nervous. But then he stopped, right in front of me, gave me a thumbs up and said:

“Me too”, he said again, pointing at my tshirt, that said “Jew and Arabs Refuse to be Enemies”.

We went on, talking about what we can do to stop it. I have to admit I didn’t come up with loads of brilliant ideas.

Walking back home I kept thinking about how my tshirt just invited someone I don’t know to the next demonstration. It was amazing.

Over the years I’ve witnessed many reincarnations of that brief meeting. On the street, at work, at family gatherings. Time and time again I saw how tshirt start conversations, help minds open, change things in the real world.

This is why we’ve created RIOTANDCO – to make amazing tshirts that will carry messages in to the world, create conversation, and help in making the chages this world so desperately needs.

3 thoughts on “THIS IS NOT A POST ABOUT TSHIRTS”